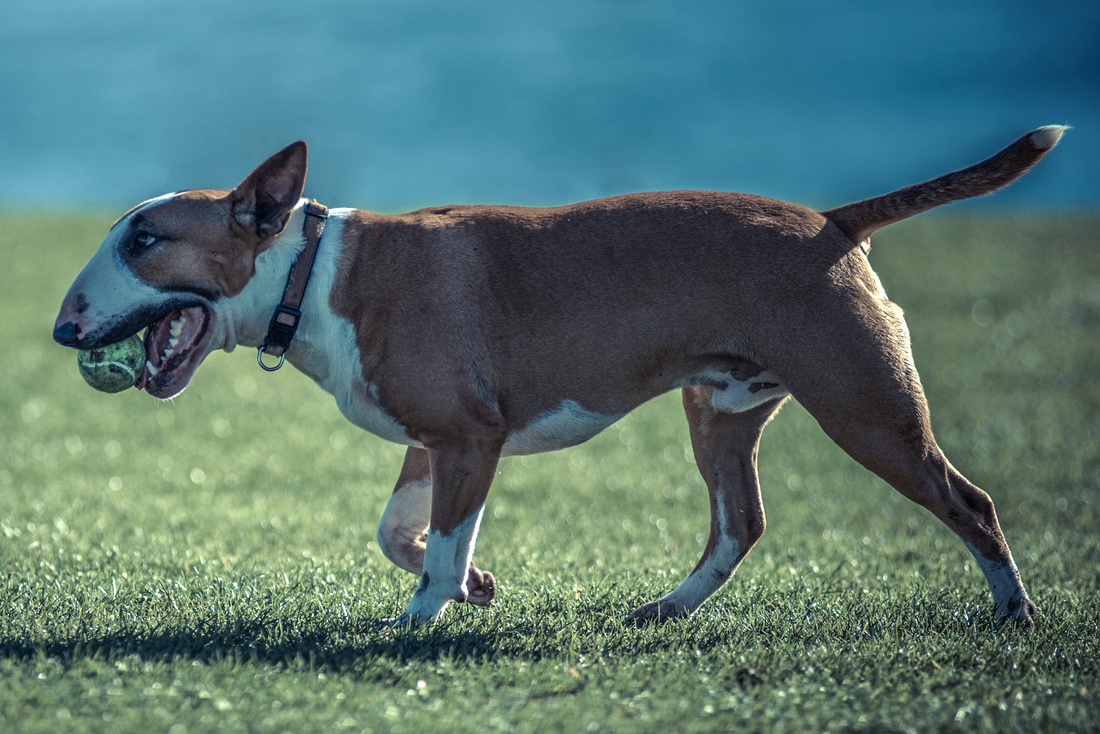 On Saturday November the 5th, 'Bonfire' or 'Guy Fawkes Night' as it is known here in the UK I went up onto Plymouth Hoe to meet Stanley and his owners for a pet portrait shoot. I have known Chris for a couple years now through the local live music scene and had first met Stanley last year.

None of this sounds remarkable and given that most animals do not respond well to fireworks, it is not unusual to give your dog a good run in the day to tire them out for a night in. ( I say most, because our Cat 'Charlie' who left us for Cat heaven at the grand age of 18 earlier this year used to love sitting on the window sill and watching them). The big difference for me is that I have a phobia of dogs.

Now I am much better than I used to be, and have definitely progressed a lot recently, because to get close enough to shoot a dog, even a couple of years ago would have been quite unlikely. I think part of my phobia stems not just from being nipped by our own mixed breed dog when I was very little, but having my tendon snapped when bitten by a Farm Dog in my teens. It's a long story but I don't blame the dog as I should not have been on his farm (:

Anyway I have found that facing the fear head on has helped, and ironically I actually love dogs once I get to know them, so most of the phobia is related to the unknown quantity of a dog that I have not met.

Stanley is an English Bull Terrier and while most breeds like this are often misunderstood, there is some logic behind the fear that many have of them, because they are undoubtedly very powerful. While a normal terrier may create havoc with the contents of your fridge, a bull terrier is quite capable of biting through the fridge itself. Here is the thing though. They are often very calm and predictable animals, particularly if they are loved and trained well like all dogs should be. Stanley never barked once for the whole session, and this for someone who has a phobia makes a huge difference. Often a barking dog can make you jump and then the dog can sense your discomfort and the whole irrational fear thing can become like a self fulfilling cycle of unquietness. I say irrational because phobias though rooted in genuine concern usually are. I would at the height of my phobia have willingly jumped into a ring with Mike Tyson knowing the most likely outcome for me would be a swift knockout, than stroke a dog who could do anything in my mind despite being able to fit in it's owners handbag.

Anyway Stanley was brilliant. For me , although I am no Crufts judge the most pleasing aesthetic for me with this breed is the line they make in profile. Their muscle tone shows through their short coats and the short back and large powerful head create a unique proportion, and so I tried to capture this. 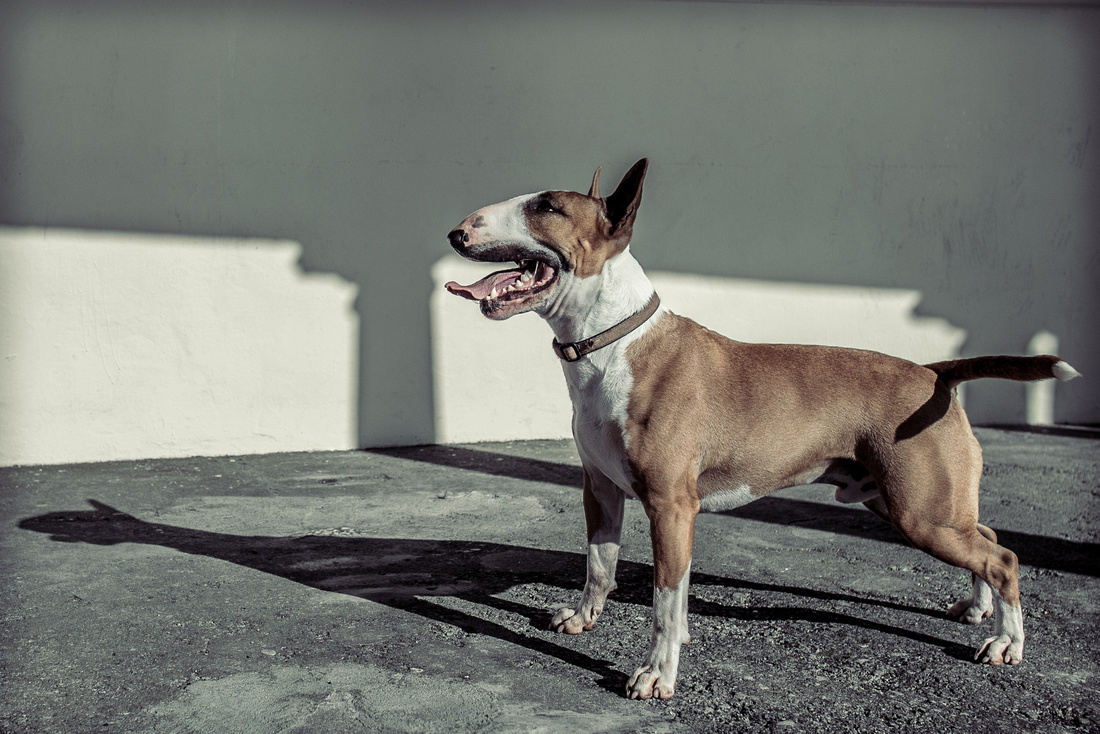 The shoot took place at midday and most photographers will avoid this like the plague. The best light is often at dawn and dusk, in fact a grey overcast day is often a chance to get your best work done. This is because the contrast between bright overpowering strong light and dark shadows is greatest in the middle of the day. It means that details often get lost in shadow and highlights often get 'blown out'. (When a photographer says 'blown highlights' they are referring to the brightest parts of a picture where there are just white patches in the exposure with no detail recorded.) On a grey day or at the beginning or end, the light is softer though and the cameras meter is more likely to calculate a more accurate exposure that will capture the subtle dynamics more faithfully.

Midday does have it's advantages though. You can turn a disadvantage like obvious shadows into an advantage by accentuating them and making them a into feature, and you can use the bright sunlight to your advantage in being able to operate at higher shutter speeds to work hand held and capture motion, which with animals is very useful. Until the very end of the shoot (when I used the D700) I used the Nikon D750 which although only having a maximum shutter speed of 1/4000 compared to the now 8 year old D700 which can operate up to 1/8000 was more than quick enough to catch Stanley whilst running around.

The other thing to remember when shooting in bright sunlight is that unless you use a filter in front of the lens you will have a hard time when opening up your aperture. So an aperture setting of something like 1.4 with a Sigma 35mm whilst brilliantly isolating your subject from the background will often result in your image being overexposed, even at very high shutter speeds. A lot of dogs though have long noses or snouts, so if you want to get both the eyes and the nose in focus you will need to step down a little anyway. You can see this clearly in one of the rejected shots below where the plane of focus is so narrow at even f2.8 that while the ball and the line of grass on the plane below it is sharp I have missed Stanley who is fractionally behind. 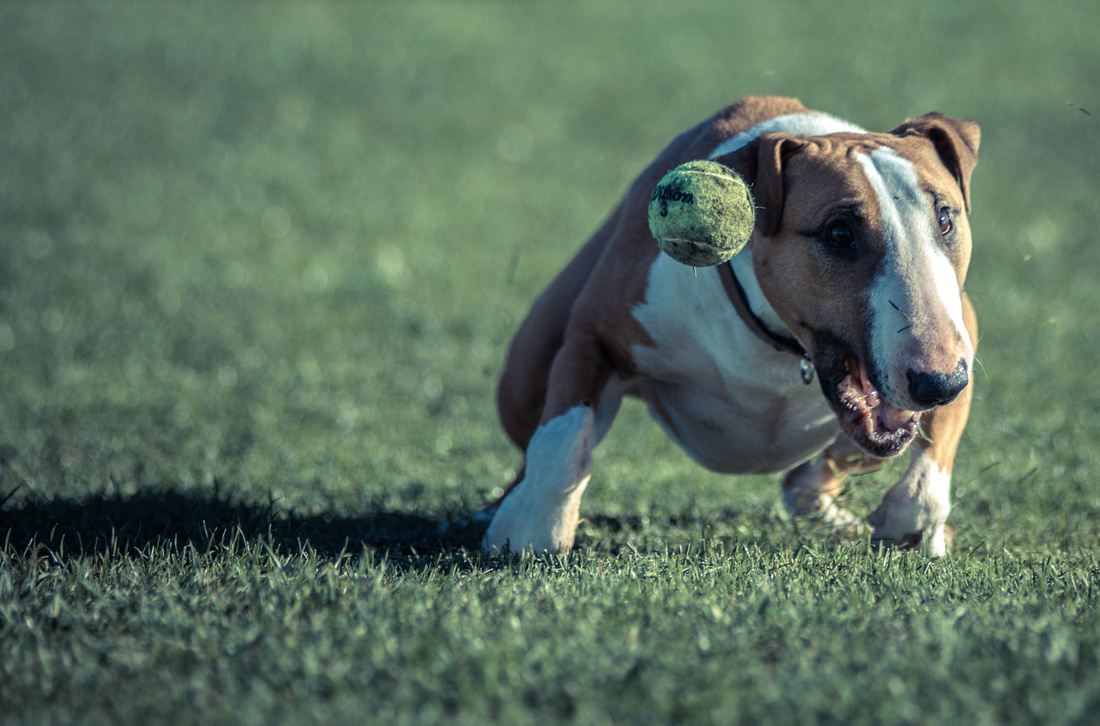 I use a variety of prime lenses with the Nikon kit rather than zooms, and so while I started with the 35mm Sigma I then swapped to the 300mm Nikon f4 and the 180mm F2.8 telephotos to isolate Stanley whilst running towards me, and then the 20mm for the character close ups and compositions in which I wanted to include much more of the environment. You can see Stan up real close in the photograph at the end of this blog post shot with the 20mm and how it adds to his charm. I then finished the shoot down at the seafront with the D700 and the 85mm 1.8 which is pretty much welded onto it nowadays because I like the way it renders out of focus highlights in the background and it seems to love the refracted light from the sea and adds a softness that for portraits is often more flattering then everything being pin sharp. 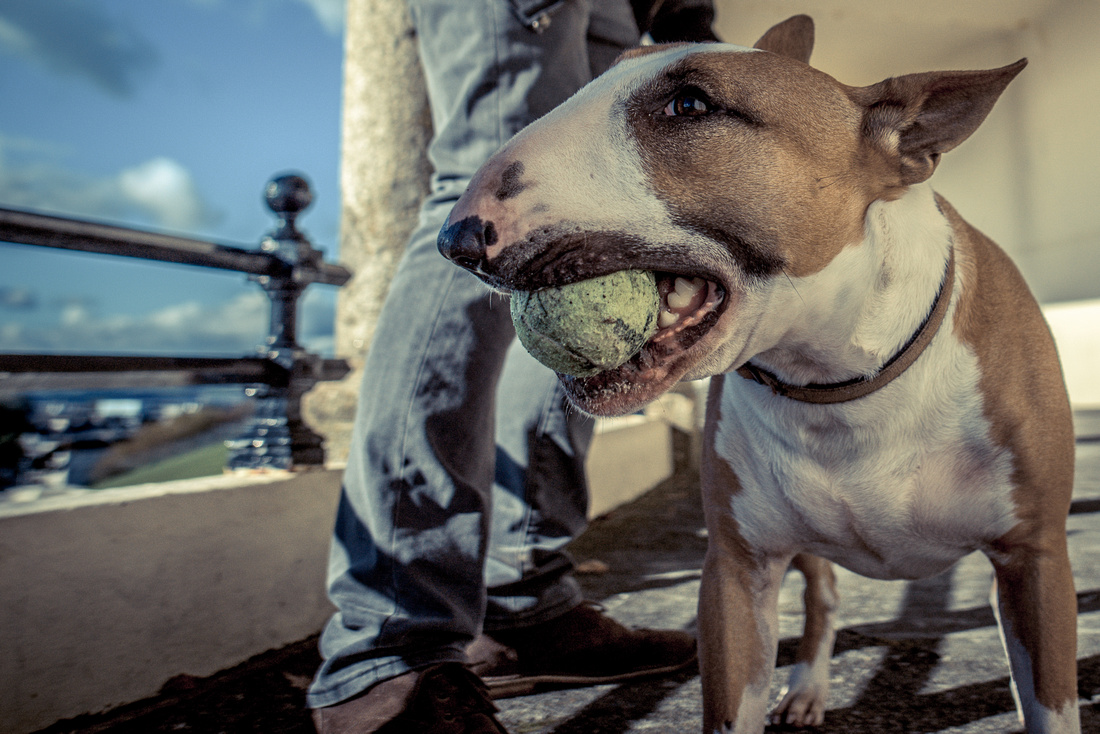 You can book your pet, family, professional or personal portrait starting from as little as £25 here at Greenbeanz Photography using the contact form here - http://www.greenbeanzphotography.com/contact.html, messaging me on the Greenbeanz Photography Facebook page https://www.facebook.com/GreenbeanzPhotography/  or emailing me at – [email protected]